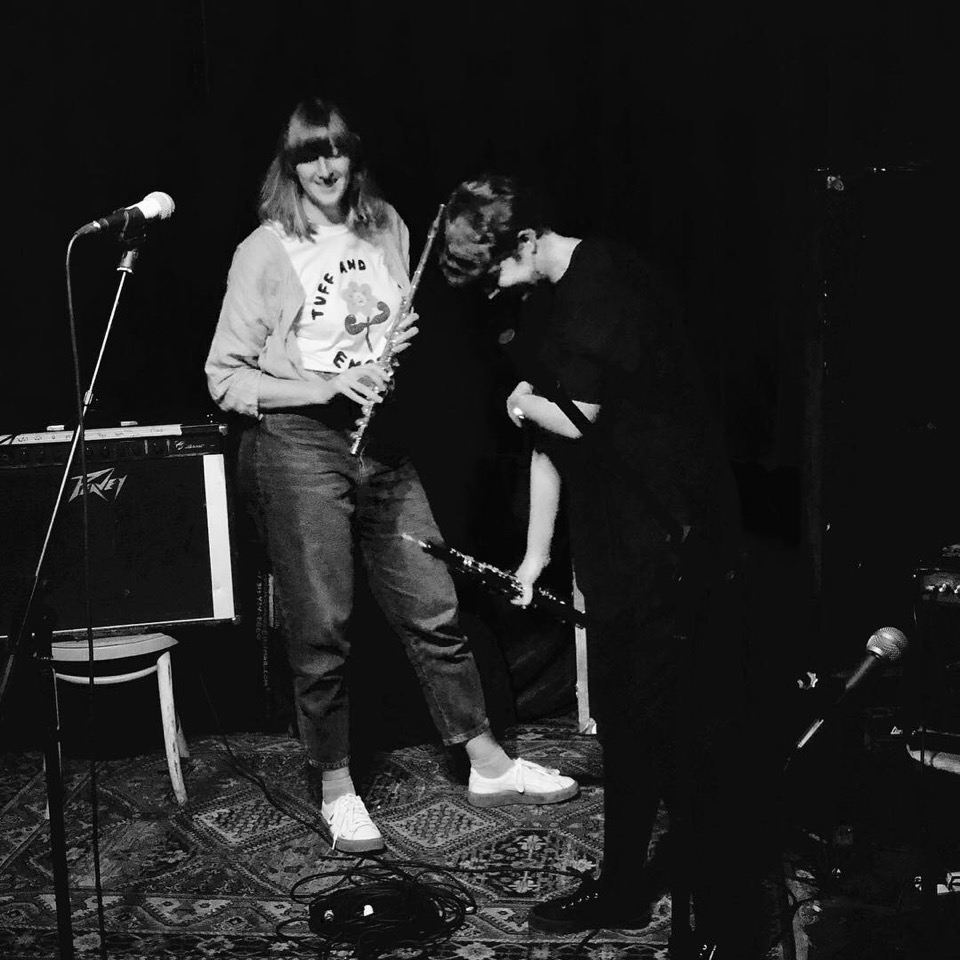 Recordings will be experienced via a handful of subwoofers and spatially placed speakers, accompanied by Dominic Lash – double bass, and by the artist Shirley Pegna – cello. Installation visuals created in collaboration with artist printmaker (and son) Louie Pegna.

Coims and Adam Bohman first became acquainted when they appeared on the same line-up at a QWAK club at the Cube Cinema in Bristol last year. Their collaboration at Audiograft will be their first live performance together.

Interested in the possibilities and constraints offered by both repetition and woodwind instruments, Rebecca Lee and Marie Thompson work with the breath, spit, overtones and multiphonics of oboe and flute.

Shirley Pegna is a sound artist, musician and composer, interested in sound as a material. Her arts practice encompasses working in the realm of both the long distance and very close up sound found in our environment. Her geographical reach has taken her sailing round the Arctic in the early winter of (2018), where she immersed herself with sound and vibration from the ‘top of the world’.

Dominic Lash is a double bass player and film scholar. He is active in improvised music (where his regular collaborators include John Butcher, Angharad Davies, Matthew Grigg, and Alex Ward) and in experimental music, performing compositions by the likes of Eva-Maria Houben, Éliane Radigue, James Saunders, and James Tenney. His first book on film is forthcoming this September from Edinburgh University Press.

Coims is the Bristol based experimental sound duo of Jan Davey and Oliver White. Exploiting modern, prepared percussion and fretted instruments fed through complex chains of mystery black boxes, Coims generate ominous clatter and knock up a fulfilling sonic stew. Since 2016, the duo have built a remarkable body of releases, their most recent being a collaborative album with the sound art duo Copper Sounds, who performed with Coims at Supernormal in 2019.

Adam Bohman has spent the last 40 years or so collecting found objects and making home-built instruments. He now possesses a virtuosic ability to coax extraordinary sounds out of his unlikely objects, preferring the natural timbres of each played article to remain untreated. Working with free improvisation, sound poetry and tape collage, Adam is a member of British experimental groups, Morphogenesis, The Bohman Brothers, Secluded Bronte, and The London Improvisers Orchestra. He is the subject of a brilliant new documentary, ‘By Biro and Umbrella Spring’.

SUPERNORMAL is a three-day, experimental arts and music festival which takes place at Braziers Park in Oxfordshire. The dates for the festival this year are 14-16th August. Born from a place that values the currency of ideas and imagination rather than commercialism and profit, it champions multi-faceted, exploratory art and music from the underground, margins and fringes to impart inspiring and engaging encounters beyond the everyday and the expected.

Beginning life in 2010, the festival evolved from Braziers International Artists Workshop (BIAW), an artist-led initiative that started in 1995 bringing artists from around the world to Braziers Park for a two-week residency each year. Supernormal carries the baton of BIAW and is intended to give the arts a far wider audience and artists a greater challenge than the former artists’ residency or conventional festival ‘with art attached’ ever can. The focus remains firmly rooted in art, environment and pushing boundaries, embracing difference whilst celebrating common cause.

Supernormal is a Community Interest Company and not-for-profit organisation produced and curated by a small collective of artists, musicians and enthusiasts.